The original piece by Michael Barnett was published on Stuff on 9 May, 2017. 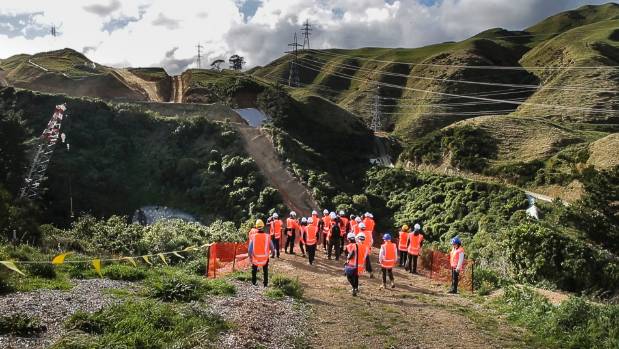 One only needs to look at Auckland to see the folly of building more and more motorways to solve congestion and our leaders continue to offer this as the solution. On a recent tour of the Transmission Gully project, Transport Minister Simon Bridges brushed off suggestions that this will simply move the “chokepoints” further along Wellington’s motorway.He said “the full benefits of the corridor will not be realised until associated projects are also completed. Of course, there is the final piece that’s very important and work is being done on right at the moment, and that’s [transport] into the city”. What Minister Bridges doesn’t say is that new motorway projects are also planned through the city itself – the so-called “four lanes to the planes”: NZTA has published plans of these for years.

This makes a mockery of the the Let’s Get Wellington Moving (LGWM) process and its expressed desire to find transport solutions acceptable to Wellingtonians. Light rail works well in Australia. Why not in the capital? SUPPLIED

It is clear that this Government and NZTA have already decided to continue its road of national significance all the way to the airport, in spite of the poor economics.

It is not just about transport. There is a need to reframe the debate by asking what we want our urban environment to be; then fitting our transport needs around it. We could start by asking: do we want the car to be king with all the inherent congestion, parking, and pollution problems it brings?  Or do we want our city streets to be relatively safe open spaces like they once were, where people can move freely about and get to where they want to go?

Other cities world-wide have moved there – why can’t we?

In Wellington, congestion and travel delays are primarily a peak-hour problem. To solve it Wellington should implement policy to reduce the amount of commuter traffic entering the CBD.

This can be achieved via a traffic management that discourages commuter traffic at peak hours. But we also need an improved and integrated transport system based around rail as the prime people mover. Why light rail? Because the productivity of a light rail lane is 10 times that of a private vehicle lane, capable of moving 12,000 people per hour versus 1200 people per hour by car.

The LGWM project has identified that Wellingtonians want public transport improvements, fewer roads and cars, a more pedestrian friendly city, and a desire to protect the natural environment.

Here are some practical suggestions to achieve this goal:

1. Remove through traffic from Vivian St and Kent Terrace by closing the off ramp at Vivian St and directing traffic two way along Karo Dr. Currently, Te Aro is a wasteland of under developed commercial and vacant land.

This area could be developed into a wonderland of residential, retail and commercial property with lots of open space to meet community needs.

2. Spend some of the roading dollar on dropping Karo Dr below ground and open up the connection between Brooklyn and the CBD. Use the remaining funds on a multi-modal transport system with light rail as a key component on high population density routes.

It is time the Government and the Transport Agency came into the 21st century. Urban motorways were a feature of post World War II development and their construction shaped the cities that accommodated them. Planners worked on the assumption that cities should be developed as single function zones. Housing developments were designed by sub-divisional engineers, industrial parks were designed by industrial engineers, and road and traffic engineers designed roads and expressways, all in isolation.

Such single function development resulted in urban sprawl and generated intolerable traffic congestion. More motorways will not solve this problem.

NZTA is the government agency tasked with delivering transport solutions that will help communities across New Zealand thrive. But it can’t think beyond more roads as the solution to urban transport problems.  Given this mindset and culture, I am led to the conclusion that NZTA is not an appropriate organisation to be leading transport planning and development in Wellington.

Michael Barnett is the convenor of Fair, Intelligent Transport (FIT) Wellington and he is a former roading engineer at Wellington City Council.