Big ups to the student groups that lobbied the local bodies to get a discount on student fares.

A bike rack mounted to a bus in Whistler, British Colmbia

While politicians are quoted in the articles about public transport, I have met senior regional council people who are less-than-positive about bus bike racks – hopefully they have been sidelined. 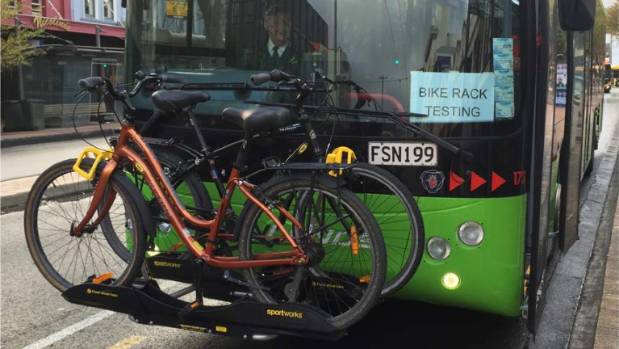 Bike racks may soon feature on all buses across the Wellington region’s public transport network. POPEC/SUPPLIED

A raft of fare cuts for Wellington public transport users are a step closer to being locked in, while commuters can also expect drastic improvements to the accuracy and scope of real-time updates.

Tertiary students, under-19s and monthly rail pass holders are all in line for new discounts after Greater Wellington Regional Council’s sustainable transport committee agreed on Tuesday to draft a range of fare initiatives for public consultation later this year. A raft of new public transport fare discounts look likely to be introduced across the Wellington region in 2018. | MAARTEN HOLL/FAIRFAX NZ

They will be the subject of public consultation in August and September, and if approved, will come into effect in July 2018.

It is still to be determined how those changes will be paid for, with fare revenue currently used to recover 55 to 60 per cent of public transport running costs. The proposed changes would probably see that figure drop to about 50 per cent. Under-19s could soon be traveling for half price on all buses across the region. | FAIRFAX NZ

The committee also acknowledged the need to keep up with the increasing technological demands of its users, and was considering using third-party websites and smartphone apps to help.

Some of the expectations of commuters now included GPS tracking, time and cost comparisons between different travel options, and real-time journey estimates that took into account factors such as weather, road works and traffic congestion.

“To be competitive with other modes of travel, public transport providers must start providing information that allows it to be compared as a viable option,” David Boyd, the council’s customer experience leader, said in a report tabled on Tuesday.

The committee agreed to undertake further research on the proposals with an eye to implementing changes in the next year or two.

After much lobbying, bike racks on buses also look set to become a reality. The initiative was trialled on some Newlands buses from October to March.

But she was confident the racks would be rolled out on all buses across the network by July next year.

Boyd also suggested region’s real-time information screens could also be adjusted some day to show which buses due to arrive had bike racks.

It had been tested on windy, hilly roads, bus drivers were happy with it, and it was in place in many other cities and towns across New Zealand.

“We’ve run out of reasons why not to do it.”