Hutt City want feedback on the proposed beltway cycleway which will run from Seaview to Taita in Lower Hutt. The Beltway Cycleway will use spare space on railway land, and super-wide roads around Lower Hutt to start the project, and will eventually become a network of cycleways that are planned around the city.

There is an open day this weekend:

The Hutt City webpage has more information about the proposal, including concept drawings, and how you can get involved. 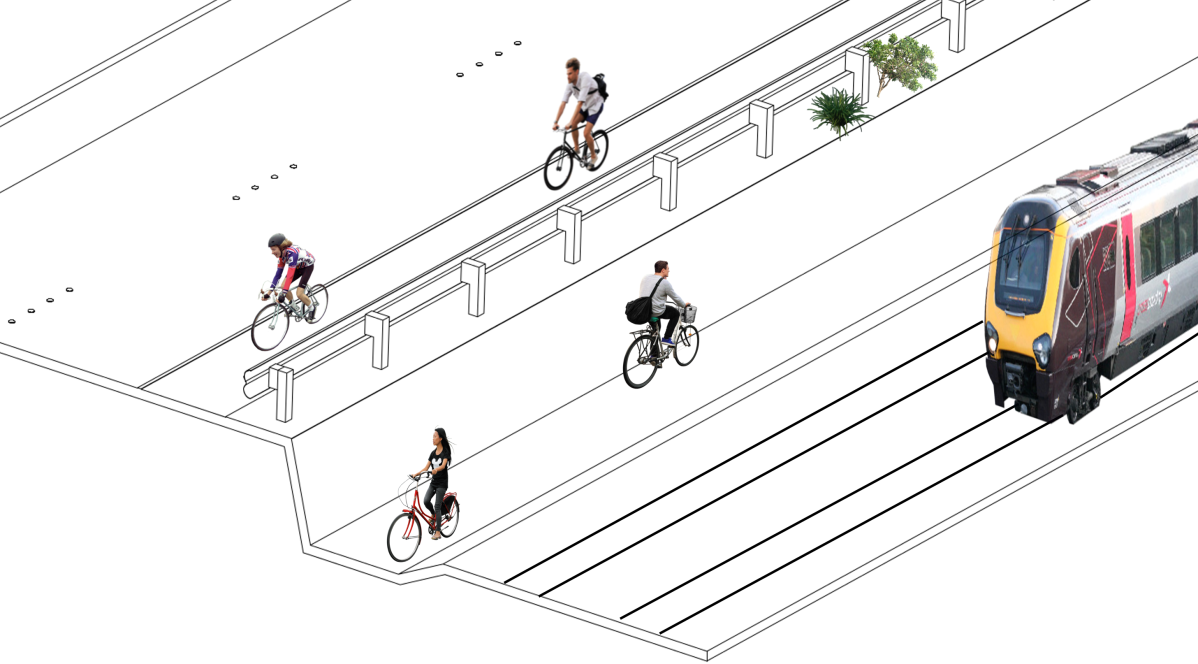 I asked for more detailed plans of the Ngauranga to Petone cycleway which were outlined in the NZTA documents being used for consultation, but surprisingly, there weren’t any – just the sketch they had in one of their consultation documents:

NZTA’s only drawing of their shared path between Ngauranga and Petone.

Instead of some massive changes with big sea walls which will take years to fabricate, there are a few immediate changes that, if implemented, would make the ride much safer, usable and better for all users. The main problems are:

The existing path is mostly about 2 metres wide and feels really unloved. The pavement is cracked and weeds grow out of the retaining wall, and stones and debris from the road cause lots of punctures. There are even bits of  broken fence, road-cones and orange construction netting in some parts. 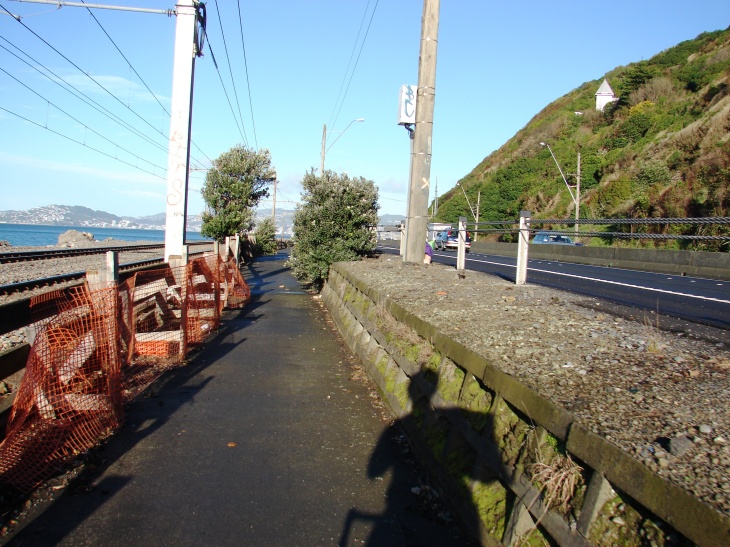 While a temporary orange fence, weeds, trees and debris are common on the path, the stoney shoulder above the retaining wall will make a good cycleway platform one day. 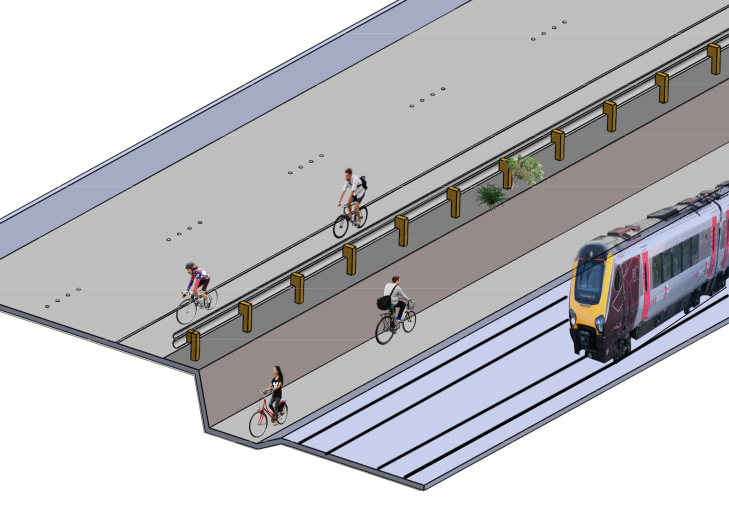 The cycleway is set below the road and next to the railway. The surface condition means that most bike commuters ride on the road instead.

But if the path is raised above road-level and paved as wide as it’ll fit,  the instant extra width and its an awesome cycleway: 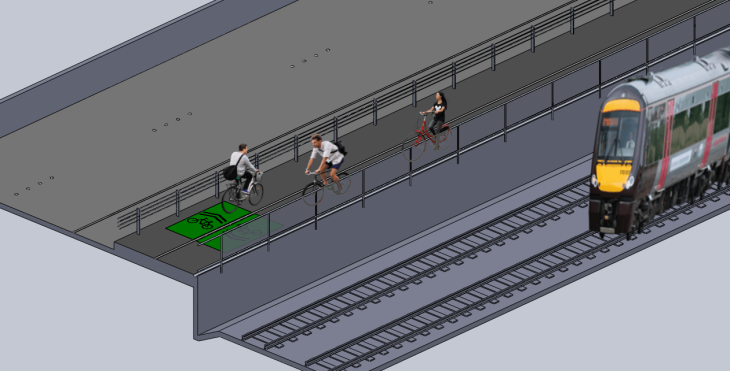 The three curves along the path look hardest to widen and improve the ‘feel’ of, but by filling and retaining a new bank the result is a cycleway about 3 – 4m wide.

Changes to widen the cycleway on the embanked corners aren’t rocket science:

Design for the embanked corners

The straight and flat parts of the path are mostly wide enough, but need a bit of love. The path needs to be raised above the road and a new fence installed on the railway side.

Level parts of the path get raised above the road

The hardest part is from the Petone over ramp down to the entrance to the shared path. 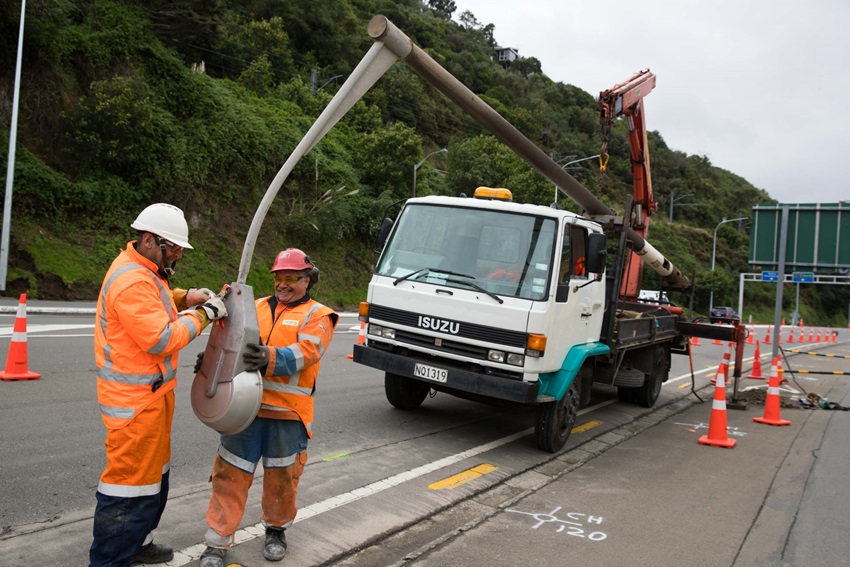 Awesome to see work beginning on one of the worst sections to the daily cycle commute into Wellington, from Ngauranga. Getting rid of the poles is a fantastic start, and it’ll be great to see the project link up with the Thorndon Quay and Ngauranga sections of the cycleway.

The full story from Wellington City Council is here.

END_OF_DOCUMENT_TOKEN_TO_BE_REPLACED 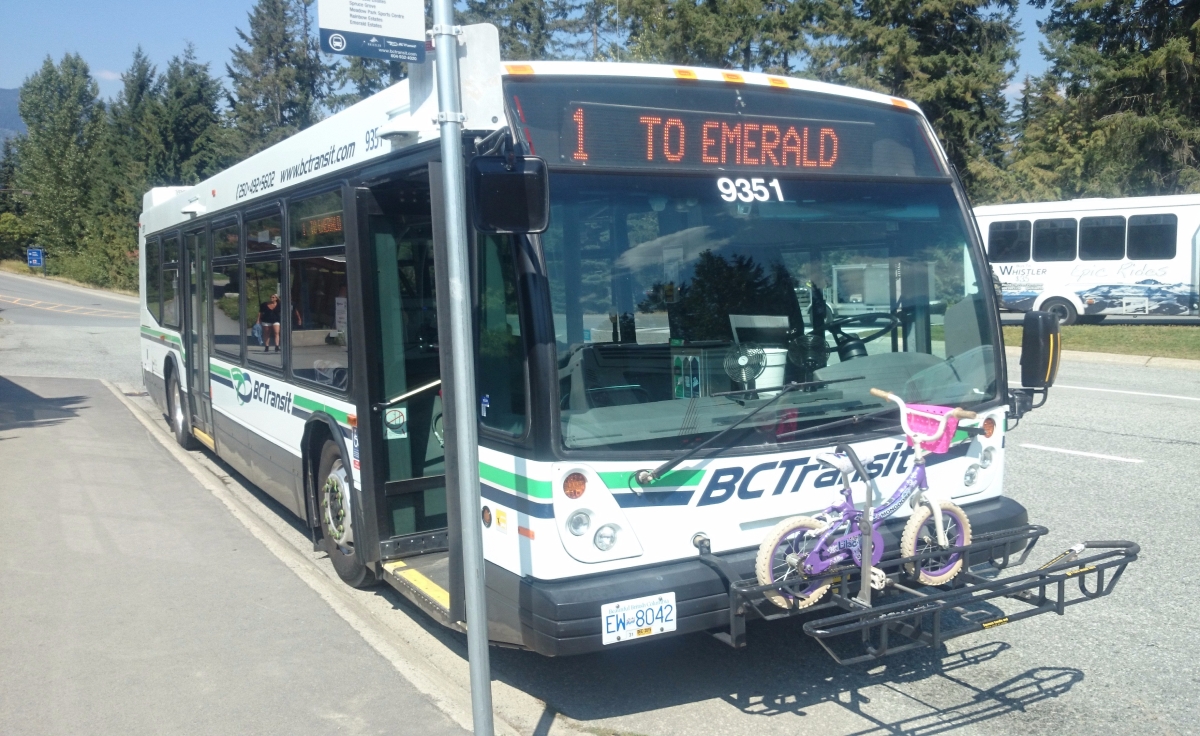 Big ups to the student groups that lobbied the local bodies to get a discount on student fares. END_OF_DOCUMENT_TOKEN_TO_BE_REPLACED 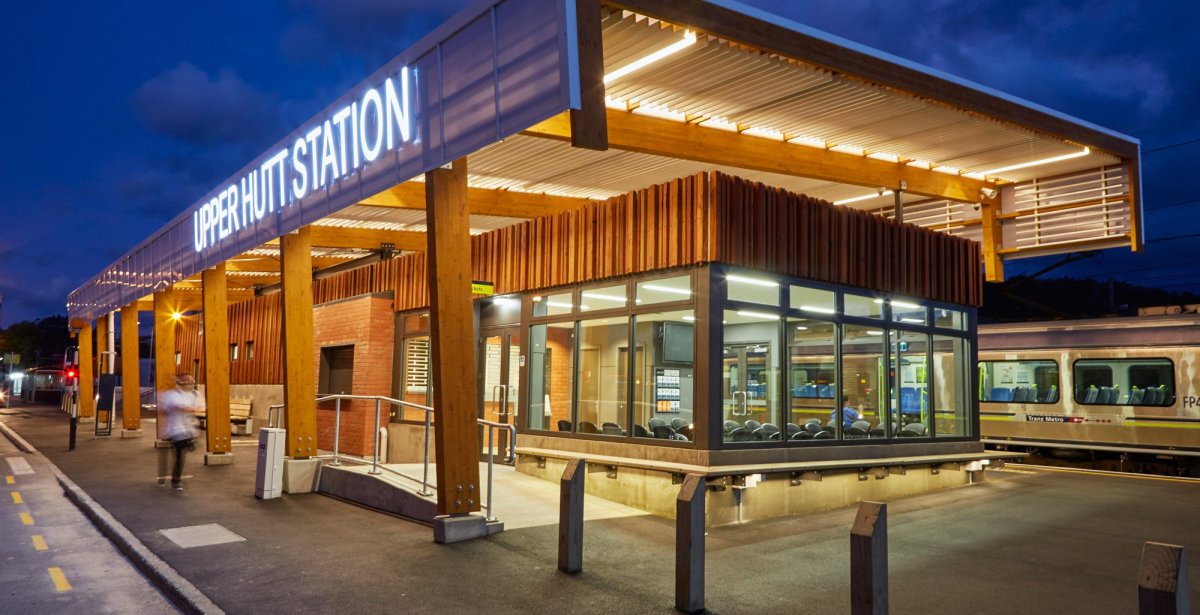 Probably the biggest choke point on the Hutt Valley train line is between at Upper Hutt and Trentham, where commuter trains leaving Upper Hutt have to negotiate a stretch of single-track between the two stations. END_OF_DOCUMENT_TOKEN_TO_BE_REPLACED

The tonkeness post proposed that cyclists should be taken off lower Adelaide Road and be moved onto the much quieter and better-connected Tasman Street.

END_OF_DOCUMENT_TOKEN_TO_BE_REPLACED 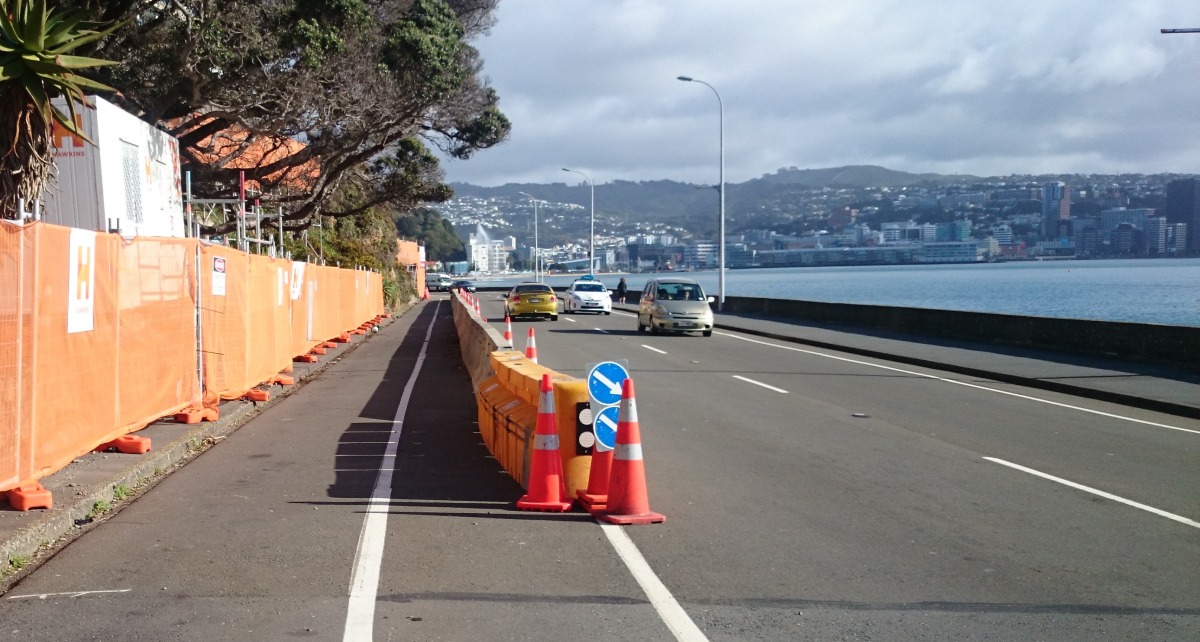 While this is temporary the barriers installed to enable retaining wall repairs on Carlton-Gore Road make a nicely protected cycleway. Who knows if it Wellington’s first, but it is located on an existing bike lane, and provides a good model of what it feels like to be truly separated from car traffic.

Contractors’ vehicles are parked inside the barriers during work hours, so the weekend is the only time that the barriers can be used as a cycleway. 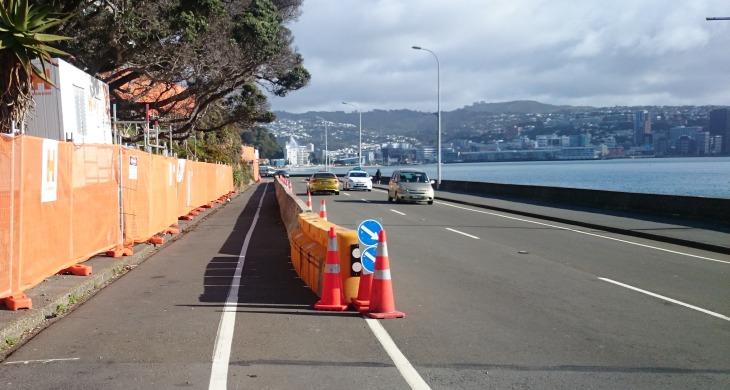 While this is unintentional, the refurbishment of Carlton-Gore Road has created a nicely protected cycleway – for the weekend at least – it’ll be blocked to bikes when the contractors return on Monday.

I thought I’d ride inside it as there were no vehicles parked inside it.

The feeling of security is greatly increased when behind the barrier. There is little chance of falling over it, or being side-swiped by a car while behind it. It feels much nicer and less stressful – you don’t have to watch your back as much, and the passing cars don’t feel as intimidating.

It would be great if something like this, where a barrier that physically separated cars from bikes, was installed to create more separated and protected cyleways – places like narrow and busy streets, and blind, left-hand corners would be great applications.

For the moment, this is worth checking out on the weekend, and hopefully we’ll see more permanent cycling infrastructure like this in the future. 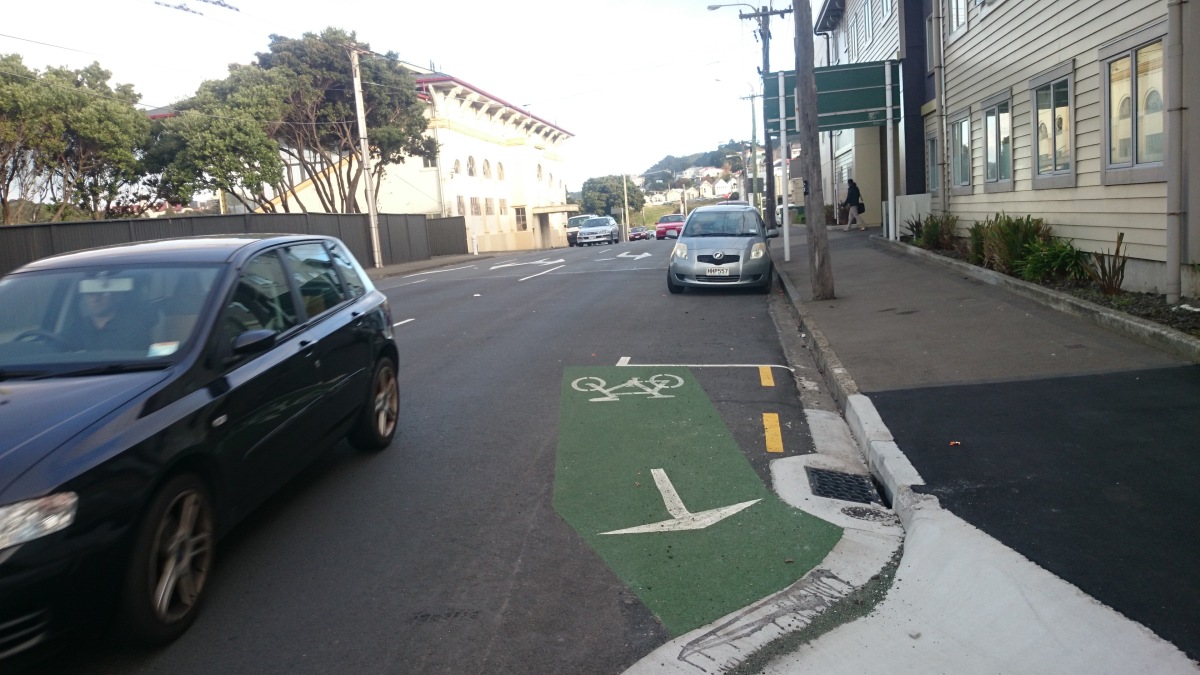 In an apparent pander to cyclists (or maybe the road design code), the design team on the Arras Alliance have come up with this lovely bike exit. It signals nicely to cyclists that are approaching the Arras Tunnel that they should exit at that point to avoid the Perils of the Arras Tunnel, for those that enter would likely suffer a fate similar to our ANZAC soldiers.

First, the $150 Million Memorial Park project doesn’t have any provision for cycling either leading up to or going through the tunnel – not bad for a project whose aim was to liberate a whole lot of public space.

Secondly, by installing the offramp there, they imply that people would want to, and should, cycle along this horrible stretch of three-lane-major-arterial road. Plus carparking. With cyclists shoe-horned in between. Really?

Ok, so NZTA didn’t or wouldn’t think about cycling for it’s segway to the $90 million Basin Flyover, $487 million Mt Vic Tunnel Duplication, $100 million Ruahine Street duplication and eventual 4-laning to the Airport – another $100 million? A cycleway probably won’t fit into the budget. But at least they gave cyclists an escape ramp before they plundered into the newly-built Arras Tunnel.

And Wellington Council are not so innocent with their ‘wait and see’ approach to building the Island Bay cycleway, where instead of starting at the City end of the path, construction will start at the Island Bay end – allowing commuters an easy journey from Island Bay, and then its survival of the fittest from the uncompleted sections into town – having to mix with traffic. With this in mind, the Island Bay Cycleway is hardly likely to get real patronage – cyclists that won’t ride if they must contend with traffic – until fully completed, which depends on what happens with the Basin Flyover design.

Part of the Ilam Road Cycleway. This is outside University of Canterbury and removes bikes from the traffic flow. This form of protected cycleway is the preferred layout where cycleways have to be built on roads. Cycling in Christchurch

What could have been done? Bike lanes from the bottom of Adelaide Road to the tunnel entrance would be a fantastic start, preferably separated by carparking like in the above photo. And if they really don’t want people in the tunnel (and I can see why – fumes, fire, safety), maybe a separate ramp that takes cyclists around the top of the tunnel, guiding them down Troy Street or Cambridge Terrace separately from Pukeahu park. This solution does not depend on the Basin Flyover in any way.
Cyclists could also be diverted down Tasman Street and then onto upper Tory St or Cambridge Terrace on a separated path. See my newer post: Tasman St Cycleway for more information.
Additional cost to the $150m project? Pukeahu / Arras / National War Memorial have been completed now, so it’s spilt milk, but it could have been a lot better if the will existed. NZTA just want to build more motorways no matter what the cost or who wants them, and WCC somewhat lacked vision when the project started. Lets hope that with Mark Peck’s recent shift that meaningful cycleways and cycling infrastructure can be conceived and built with enthusiastic council backing, and not some pathetic, token, green-painted ass-covering ramp that adds nothing to Cyclingness, not now, not ever. 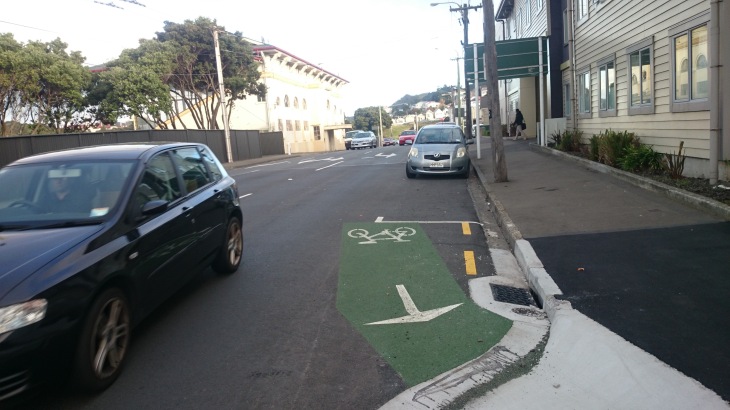 A cycleway exit just before the Arras Tunnel. It seems that the budget didn’t extend to a cycleway through the tunnel, nor to a proper lane leading up to it. NZTA: Adding to Cyclingness since cavemen fought dinosaurs…

The placement of this road sign and cone shows a complete lack of consideration for cyclists, but it need not be the case.

Photo of the day: contractor placing sign on cycleways. There’s no two ways about it,  this sign is on a bike lane  – it’s right there in green, with a white bike in it, but obscured by a road cone and sign stand, on both sides of the road. Is the cone there just to completely block the cycleway and force cyclists into traffic?

On a weekend when recreational cyclists use the road and form an opinion on whether they might like to cycle to work, it’s things like this – being forced into traffic even for a short time – that could be the dealmaker.  END_OF_DOCUMENT_TOKEN_TO_BE_REPLACED